My experience with Go

I’ve never written about “why I like language X”. I don’t find the topic particularly interesting either as a writer or as a reader. But I feel compelled to make an exception with Go for two reasons:

Fair warning: I don’t have a particular interest in language features in the context of programming as a craft, so the article won’t be about that. I like theory and I enjoy reading about different languages. But when it comes to building products, I care about other aspects:

As a result of this, I’ve often felt out of place among developers discussing programming languages.

The official Go documentation is really good. I almost never have to search the web – the official docs have the answer I’m looking for. As I use the superb Dash for browsing documentation, I can go on just with dash and the editor. There is very little context switch.

Godoc offers testable examples: snippets of code embedded in the documentation itself. You can run them while reading the docs and they are part of the automated test suite.

Each package in the standard library has an overview, a table of contents, and an examples section. This convention created a habit: if I have no idea what the package is about, I start from the overview. Otherwise, I go straight to the examples section: I look around, find a good example that works for me, move on to the next problem. In case you’re not familiar with it, here is how testable examples look like: 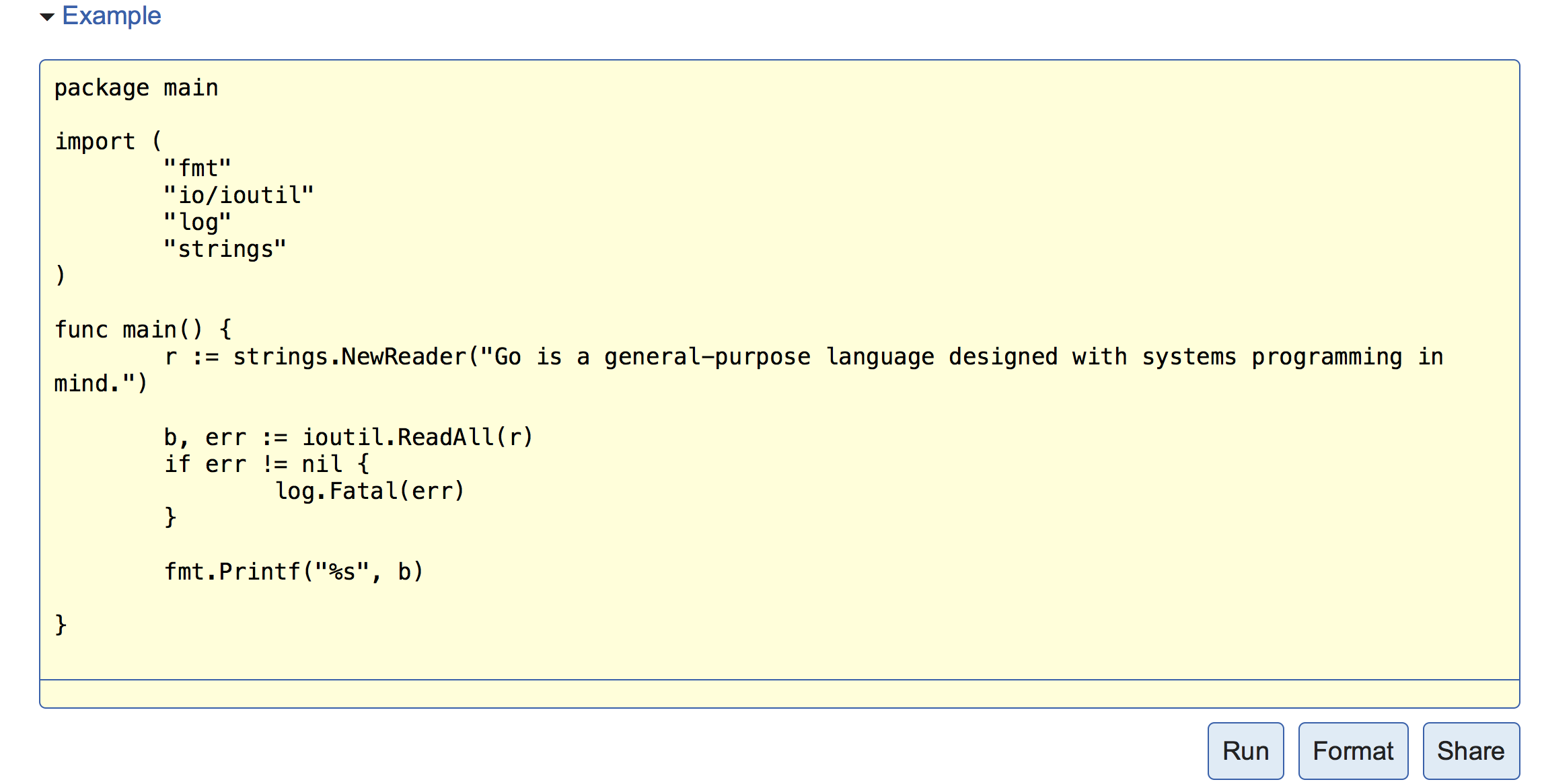 Being able to run examples right there is helpful, I use the feature when I’m not sure I understand the docs.

The first steps with a new language are always a bit cumbersome, because I don’t know what is idiomatic and what is not. Effective go was vital for me at the time. I’m not sure if the name of the document is inspired by the wonderful Effective Java. Either way, the result is the same: I constantly went back to it as the ultimate source of inspiration for writing code. If you’re relatively new to Go and want to learn more, “effective Go” is a perfect companion.

In general, there is a strong documentation culture in the Go community and I couldn’t be happier about it.

I experience a direct correlation between languages and the kind of testing I can write. That’s why I call it “testing experience”; writing tests is more than just tooling.

Writing tests is possibly my favourite Go activity because:

Because of these factors, I enjoy writing tests in Go more than in any other language I worked with in the past. The tests I write give me a great deal of confidence which is a driving factor of the “workflow experience”, a perfect segue to the next point.

The everyday relationship I have with the language, the combination of tooling and language features is what I call “workflow experience”.

Let’s start with the tooling: Go provides great basics for everything but dependencies. While I’m happy to see an amazing team doing amazing work on dep, the current status isn’t great for such a recent language. I vendor everything via govendor and it works. But I have to read docs every time I use it.

Now, I’m sure one could say “it’s your specific tool, X is better!” and I wouldn’t argue. The point is, though, that my experience with dependency management is pretty much the same as in any other language I’ve come across. As an everyday user, you only need to know how to download, update, add or remove dependencies, and you’re good to go (pun not intended). I have high hopes for dep to become the one solution that makes Go a modern language from this perspective too (yes, I’m indeed implying it is not right now).

Apart from dependency management, the tooling around Go is pretty awesome. The official toolchain offers a coherent command line experience (coherent is better than consistent when it comes to interaction, but developers seem to like the latter more. Sorry, I digress).

I’m happy I don’t have to bother with styling (gofmt is so good), I like even more that testing is part of the official toolchain. The Go community builds a lot of useful tooling, so to keep it short, I will discuss only the ones I use every day.

The first on the list is gometalinter, a nice tool that runs many linters and normalizes their output. I use it in all my Go projects because it takes care of the boring parts (like installing the linters I use) and makes setting up new linters a 1-minute process.

Another nice tool is go-bindata, a small utility that generates Go code to embed files from a disk in the output binary. I’m using it to embed React applications into binaries, it’s easy to use. Unfortunately, it seems completely abandoned right now, so I’m looking for a replacement. Interesting note: it’s been working fine for almost two years after the last commit. Stability is a priority in the Go world and I appreciate it a lot.

Last but not least, I love how well-integrated the Go tooling in Visual Studio Code is. The editor supports Go officially and the editing experience is enjoyable. It’s worth underlining that most features are built upon tooling you can use in other editors; most features come from CLI applications (gocode or gomodifytags are great examples).

Tooling makes for half of the workflow experience, the other half is language features. When I started using Go, I found a mix of very high-level constructs (like select, go and go routines) and low-level ones (like pointers, structs) confusing.

After a while though, I started seeing an interesting development in my way of thinking about code. I was more relaxed about naming and structural organization of different parts. Go makes it easy for me to remove things, to restructure big chucks of code or just to change them.

A few factors make a difference: very few language features make the code always easy to read, a strange mix of high-level and low-level constructs gives me enough power without too much responsibility for the underlining system, and the ability of writing very solid integration tests makes refactoring a confident process.

This workflow is the most relaxed I experienced so far. When discussing Go features, I like to say: I came to Go for the go keywords and channels, I stayed because of interfaces and lack of features.

The workflow experience helps to start new projects too. To me, starting a new project means writing some code so I can understand the problem I’m trying to solve better. There’s a lot of cognitive load, because it’s an uncharted territory: I have to think hard about naming and about dependencies between parts.

The workflow experience with Go makes bootstrapping easier on average. But there’s more: the compiler is super annoying (in a good way), and I have to check all the errors before I can even run the program once.

The frustration of writing if err != nil all over the place is at the core of one of my favourite features: the distinction between errors and exceptions. It forces me to consider things I can choose to ignore while bootstrapping a project in other languages: the file may not be there, the network connection may fail, and so on.

Unfortunately, it is indeed annoying to write a lot of if err != nil, so I guess people often do not get past the initial impact. So they never experience that “Go programs are production ready as soon as they compile”. Sometimes, that’s really true.

The Go standard library is often praised and I can see why. Most parts are solid, easy to use, and well documented. In no particular order, here are a few things I enjoy about the standard library:

Working with time and dates has always been a bit painful in any language I used. Sadly, Go manages to do worse than other languages, especially when it comes to parsing time and dates. I don’t find the API intuitive. You need to provide a “date layout” instead of a pattern for parsing dates, something like (copying from the official docs):

The package provides some layouts, and if you’re lucky enough, the format you want is there then parsing dates is OK. The experience gets considerably worse if you need a custom layout. As a result “some random date” ends up in your code as a constant.

I’m not entirely sure what the reason to diverge so much from the usual “give me a pattern and I’ll try to parse this for you” was, but the experience has not been pleasant so far. If I felt more comfortable with the official issue tracker (more about this in the “community” paragraph), I would propose to change the package a lot for the upcoming Go 2.

Libraries and framework are among the most relevant factors that determine my choice of a language. I feel “there’s a good library for everything” nowadays, as the community is large enough. I find interesting that, despite the lack of dependency management tools, working with third-party libraries isn’t a nightmare.

The ecosystem is dynamic and moves slow (it’s a good thing), so upgrading libraries has always been easy despite the lack of official tooling.

This is the sore point of my experience with Go. I’ve been thinking a lot about how to approach the topic.

The first strategy I came up with was to present a (sadly long) list of examples of “culture that makes me uncomfortable”. I decided against it, because as a reader of that list, I’d feel the writer just wanted to call people out. That is not my intention, I want to share how I experienced the community, so I will do that without sharing links.

I will start from the official GitHub issues tracker. To understand more about the project, I read the contribution guide. It was depressing:

I like self-hosting languages, so I moved on to issues anyway. But it has not been a better experience.

I’ve often felt people tried to be clever more than helpful, and I have seen incredible resistance to change. I do understand changing a programming language is no easy business, but in some cases it felt unreasonable. What I’m trying to say is that I do not feel welcome to ever open an issue, because I expect it will be dismissed right away.

Outside of the official spaces, I’ve experienced a lot of contempt culture. I have seen many examples of “X sucks, just use Go”. This is not something I am able to tolerate, so I do not feel engaged with the community.

I’ve often seen contempt with JavaScript, and it is not unusual to hear things like “I hope I never have to touch JavaScript again”. I have seen twitter threads saying “X is not a real language compared to Go” or “Use Go, that’s a real language”. These things do not foster a good culture, and miss on great learning opportunities. We could learn a lot from npm/yarn eh?

On the bright side, I had this conversation on twitter and I really loved how NateTheFinch handled it. Another great example of positive attitude comes from a recent twitter thread by _rsc.

We need to see many more examples of this attitude, especially from members of the core team. Because, you know, “leading by example” has quite some truth in it.